Goofus Glass ? What is it/

Goofus glass? ever heard of it?? Well I learned years ago at an auction what it was thanks to a fellow glass collector there.

Here's what Wikipedia says:
Goofus glass is pressed glass which was decorated with cold, unfired paint in the early 20th century in America by several prominent glass factories. Because it was mass-produced and relatively cheap, it was given as a premium for buying things, awarded as prizes at fairs. It was the first carnival glass, preceding the iridized product we refer to as carnival glass today.
Articles produced included plates, bowls, vases, oil lamps, dresser sets, salt and pepper shakers and candle holders. The most common colors used were gold, red, and green, with gold usually being the predominant color. The exact etymology of the name is unknown, but likely stems from the fact that the painted decoration wasn't very durable and people felt that it was "goofy" or that someone had tried to "goof - us".
Indiana Glass Company in Dunkirk, Indiana was possibly the most prolific producer goofus glass. Dugan Diamond Company and H. Northwood were also notable producers of the glass. These companies produced pieces which consisted of lines of pressed glass known as intaglio and painted opalescent glass. These pieces are among the most highly valued items collectors seek today[citation needed].
The term "goofus" has come to refer more to the use of un-fired enamel decoration to a piece of pressed glass, rather than to the glass itself. Paint decorated opalescent and milk glass items are sometimes incorrectly referred to as "Goofus glass". Painted jewelry, items produced after the 1930s, and items produced outside of the United States are not considered to be "goofus glass".
Goofus glass production came to an end around 1930, as the process for iridized glass was discovered and started being produced.

And here is a picture...(the reason I'm doing the post right this minute is, if I don't you'll never see the picture cause I'll lose track of it.. 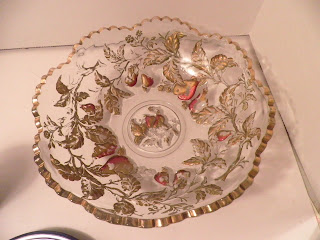