For the truly compulsive collector

This is the cream soup - about a handspan wide 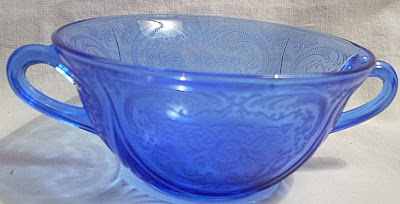 watch inside the handles for dings and small chips and all along the rim inside and out and on the base and the ridges of the pattern. -

This baby is the 13" long 9" wide platter - again watch for fleabites (the teeny tiny chips) and watch for chips on the base and the inside rim. 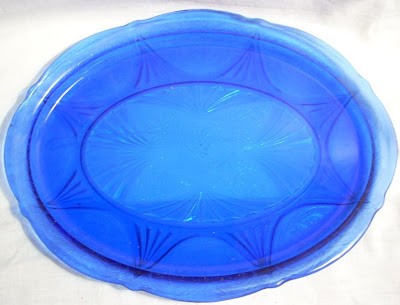 Royal Lace, along with a couple of other patterns is notorious for "fleabites" on the inside rim. This is because (Look at the platter or plate and come back) on the plates and the bowls with rims, they made a "sharp" edge inside of a rounded one. Well guess what? When you wash dishes and stack them in the closet, those sharp edges take a beating. SO, you should always put paper plates or a piece of heavier paper (not coffee filters - like art paper or cardboard - between plates and those cute cardboard soup bowls inside the bowls for the same reason.

And this, is the berry bowl. It's a small "nappy" or 4-5" bowl. It's got the exact same shape as the 10" master berry so now you can identify two more pieces just by remembering this one. 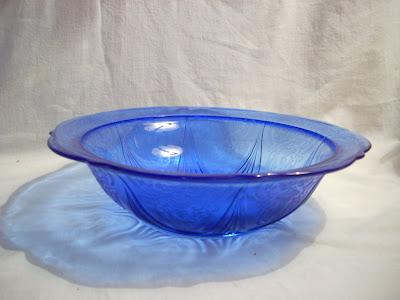 And for now - that ends our Royal Lace Depression Glass lession. What next you ask? I'll find something. After all , I still have 20 tubs and 80 cartons of "merchandise" in the garage.

And if you're bored, you can come read my "other" blog called The Compulsive Collector.
Posted by The DSRS of our lives at 11:32 AM No comments:

These are the straight-sided candlesticks. The book value in Gene Florence's Encyclopedia is $165. (market's down) 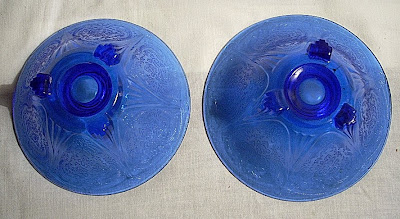 Bottoms up - just to show you what they look like underneath ( you should always look underneath and check every one of those cute little feet for dings/chips/damage as well as the inside candleholderthingeepart.

IF! IF!! you ever find these (even 1) with a rolled edge - GRAB IT and hold on for dear life and then call me. It is one of those pieces EVERY Royal Lace collector wants.

THIS is the cup and saucer - which I'm sticking in here so you can see the pattern better- Remember -blue green pink, crystal in order of importance and amethyst anything goes right to to the top of your BUY IT NOW list. 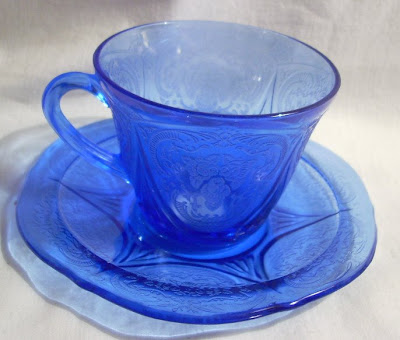 Email ThisBlogThis!Share to TwitterShare to FacebookShare to Pinterest
I've been collecting and coveting depression glass since 1975. Right before my wedding, I saw a set of Green Cherry Blossom at an auction in Berks County Pa. The green glass just begged to go home with me. However, it forgot to call my bank and arrange a loan. The auction was scheduled for 3 weeks later so I scrimped and didn't pay a bill and I brought $90 to the auction. That was a lot of money for me then, Heck, it's a lot of money for me now!

So it's time for the auctioneer to sell the Green Cherry - including plates, butterdish, bowls, tumblers, pitcher, cups, saucers. And first he auctioned it by the piece, then while they added up the total in the office, he auctioned it by the whole lot as one. Silly girl that I was, I thought $90 would do it. It went for several hundred. And I went home heartbroken but determined. Some time later the next year, we started collecting blue Royal Lace (well I also collected Green Royal Lace when I could find it which wasn't very often).

So, here is the Royal Lace story. Hazel Atlas made Royal Lace from 1934 to 1941. Supposedly the name was a tribute to the Royal Family of England, and this was around the time of the abdication of King Edward and the coronation of King George IV (father of the current HRM Queen Elizabeth II) It was made in Green, Cobalt Blue, Crystal, Pink and a few pieces in Amethyst. There are reproductions and I'll talk about them later.

The blue is far and away the favorite of most collectors but green is growing more popular all the time. The crystal suffers from looking "dirty" or yellowish after time and the pink is a very pale pink with a tendency to look orangey.

Hazel Atlas was the child of a merger in 1902. By 1928 it was known as the "World's Largest Tumbler Factory" as they churned out machine made drinking glasses. They were one of the most modern, mechanized glass factories. In 1929, they added Green tumblers to their line and in 1933 Green, pink and topaz were added. In 1936, they added Ritz blue.

Mmany assorted pieces of Royal Lace were shipped to England then and are now, via the internet and eBay finding their way back to the States. Cobalt blue was introduced in Royal Lace in 1938, a time when war was looming and shipping glass to England had lost some of its priority so most of what is found there appears to be Green, Pink or Crystal. Which is fine with me since it's hard enough to put to gether a set of blue anyway.

The story goes that Hazel Atlas had been making the Shirley Temple sets (mug, cereal bowl and creamer) for a cereal company and when they canceled the balance of the order (due to the economy or the war or lack of interest) they used up the left over materials for the Royal Lace pattern and it was so popular they kept making it. I don't now....it sure sounds fishy to me.

Royal Lace has, give or take, 38 pieces in 4 main colors. This line has 5 sizes of pitchers, 2 kinds of candle stick a number of center or console bowls. There are dinner plates and grill plates. Lots to collect.

And here pictures of various pieces atarting withe the crown jewel of any collection - the butterdish. And you'll see why this is my absolute favorite pattern. 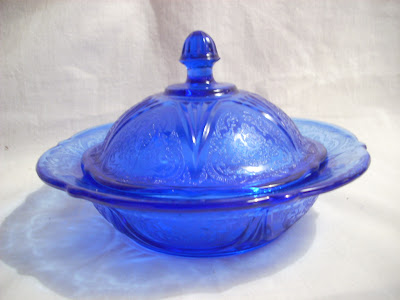