150th Anniversary of the Start of the Civil War

Really...150 years. Whoddthunkit?
The political, economic and moral issues are all still raw for large swathes of the country. BUT we're not here today to rehash that. We're here to talk Civil War antiques. A subject I'm not really well versed on. I collect depression glass, remember?
But I figured, in a vain effort to catch up on the ULTIMATE BLOG Challenge, that I'd do a quick and dirty post and show you some "antiques" I have from around that era. They are only mine because my mom and her aunts, father and grandfather saved them. And some are only here because we have access to government records in our "beknighted" country. ( like the Wiki leaks guy does too..said with tonque firmly stuck out at the government)
So, forthwith..let me show you my gems of genealogy: 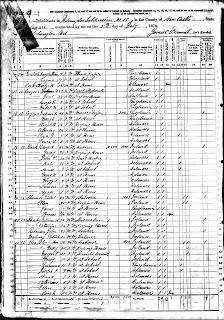 Did you know the government has census records back to like 1800?? This one is from 1870 - Wilmington De and my grandfather, a civil war veteran,and his family are listed on this exact page.  So I not only know he was alive in 1870, I know his wife was and so were some of his children.
I also have John Bradley's naturalization papers from 1850, and his muster roll from his enlistment in the 1st Delaware Infantry, as well as his discharge because he was blind in one eye, couldn't see out of the other eye and was hence unsuitable to be a solder. (NO SHIT SHERLOCK! No wonder you're a Lt. Colonel... )
Smart as I'm I forgot to take pictures for you so I'll add them later.
John ended up having something like 6 children. I know of 4 definitively. And  his oldest son was born in 1860 while he was serving in the Union Army.
There are still a lot of good Civil War Era antiques. Among those I've seen sold and traded are "dug buttons".  DUG refers to they were found in a battle field as opposed to "found in military stores" or supply depots.
Ok...tomorrow - pictures I promise.
Posted by The DSRS of our lives at 8:02 PM No comments: